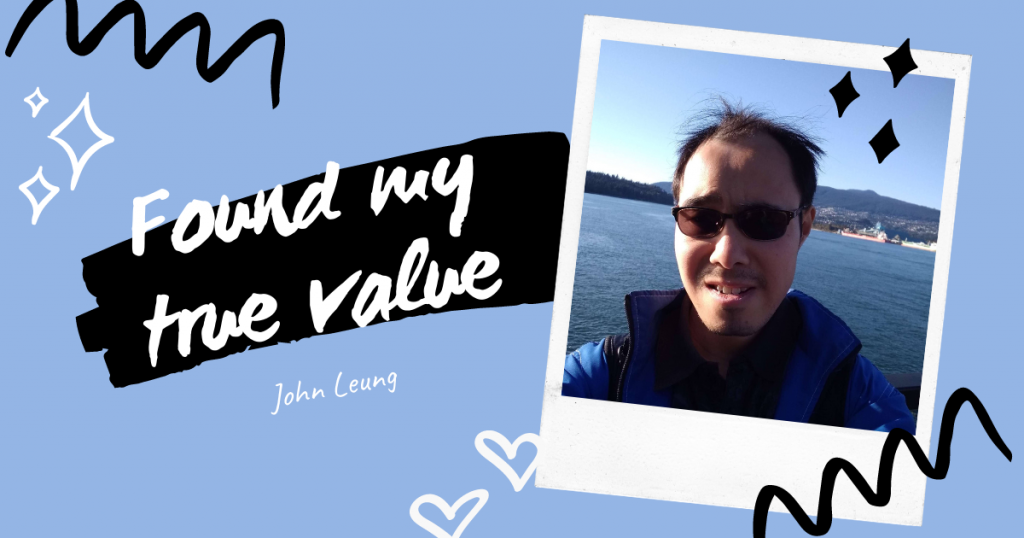 Hi, my name is John.  Looking back, my life was like going through a dark valley, and I almost didn’t make it out of it if God didn’t intervene.  I’m legally blind with 10% vision in my right eye and can’t see with my left eye.  My twin brother and I were born about three months premature, and I was in the incubator for four months.

Growing up, I knew I was different from others because I needed special care. At school, I was arranged to sit in the front row to see the blackboard better. I couldn’t take certain courses because of my vision or for safety reasons, and I’d lean close to read textbooks.  I even had a special course with my vision teacher to learn keyboarding on a modified computer and learning how to go places without getting lost.  Even though all these special treatments were helpful, I was rather embarrassed by them because it meant I wasn’t normal.

The most humiliating support was having to use large-print textbooks during classes where everyone could see that I and the textbooks were different, when in fact I wanted to hide my disability and be normal.

Even though only I have a disability in my family, I had a normal upbringing and happy childhood.  My parents treated my siblings and I fairly, but they’re also mindful of my condition.  They’d give me house chores that I could do safely, like folding laundry and cleaning, as opposed to vacuuming or cooking that requires a strong vision and quick reaction.  They also suggested that I pursue careers that are less visually-demanding like chiropractors and massage therapists.  Overall, they wanted me to live as much a normal life as possible.

I graduated high school on time with my classmates, and I went straight to college and took my parents’ advice to be a chiropractor or massage therapist instead of pursuing my dream job of being a sportscaster describing live actions in sporting events, which required great eyesight that I don’t have.  I trusted my parents, that this more logical career path would bring me success, and then I’d get married and have my own family, like everyone else.

I took courses like biology and chemistry to prepare for massage therapy school, but I failed those courses even after retaking them, and by the third year, I faced academic probation before being suspended by the college for a whole year because of my consistently poor GPA.  I was getting frustrated.  It seemed that the harder I tried, the more I’d fail, and I was further away from having a decent career.

I was also in student loan debt, and my parents were worried and frustrated with me because they’d had to pay my debt and support me for life if I couldn’t earn a living.  I’d be their burden, while my twin brother had a part-time job and earned a diploma.  His success infuriated me and made me look like a loser because I had persevered throughout my life and was “winning” in my secret competition with him, especially academically, until things suddenly fell apart.

A caring friend suggested that I apply for government income assistance for people with disabilities so that I’d be financially independent and not be my parents’ burden, but I hated the stigma that goes with it: those people are lazy bums who either do drugs or play video games at home all day.  They’re wasting others’ hard-earned income, etc.  I was too proud to get the support because I was a college student working towards a decent career, not a worthless person! 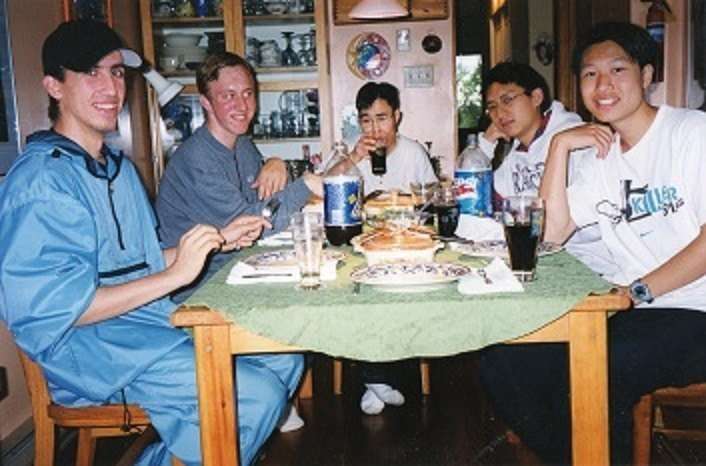 While I was in academic suspension, I’d compete with my friends in playing video games, drinking, or whatever else, trying to prove myself and gain respect, but the more I tried, the more I’d lose, and the angrier I’d get.  I’d yell, swear, and slam the table to show my frustration, or I’d drink to numb my feelings, only to go home drunk and making my parents angry.  The worst was when I broke a sliding door at my friend’s house to take out my frustration after losing in a video game.  That evening, they went to my house to demand my parents for my apology and for the door to be fixed.

After the academic suspension, even though I’d enrolled in a different program in college, I’ve lost my family’s respect, and I couldn’t overcome the humiliation of falling behind in life and the shamefulness of my disability.  I could only take two courses per semester to rebuild my GPA when others took four or five courses, so I was forced to prolong my diploma program when I was already four years behind in my career and life paths.  Even if I graduated, I wouldn’t be guaranteed a job because of my disability, so I became hopeless about my future and wanted to give up.

For the next year or so, I was more interested in dying than living.  I’d research the most effective ways to committing suicide so that I wouldn’t be a burden to everyone.  I couldn’t fail that, could I?.

In 2006, a Christian friend invited me to an outing with other Christians. I accepted because I had nothing to lose by then. The Christians who were there patiently understood my circumstances and told me that I have a lot to gain through Jesus.  I realized that I actually still wanted to live and be purposeful and didn’t want eternal suffering if I didn’t accept Jesus. I accepted Jesus as my personal Savior the next week, thinking that if He can help me, why not?

Soon after I became a Christian, I would pray to God to heal my eyesight after reading about how Jesus healed a blind man in John chapter 9, and I wanted the same.  However, Jesus explains in John 9:3 that my disability is no one’s fault, but it is to show God’s works and for me to be a blessing to others.  I’m so touched by this Bible verse that I stopped despising my disability.

When my Christian friends knew that I’d get frustrated easily, they taught me to pray to Jesus for help instead of being angry.  I was failing a course halfway through a semester, and I was scared and frustrated, but my Christian friends and I prayed, and God gave me the courage to talk to my professor about my midterm mistakes and what to do to pass the course.  They also prayed for my final exam, which I got the percentage I needed to pass the course.

I was also touched by how my Christian friends support me and care for me.  They’d spend many hours and much patience to understand my eye condition and help me to overcome my negative feelings.  They would also find ways to involve me in activities or to contribute and serve others that made me feel important and purposeful.  For instance, they not only allow me to play floor hockey, but even players from the opposing team would tell me where the hockey ball is so I can see and chase after it.  They’d find tasks in the kitchen that I can safely do so I can help cook and serve meals to the congregation when even my parents were too protective to teach me how to cook.  These are just two of many examples of their love and care. 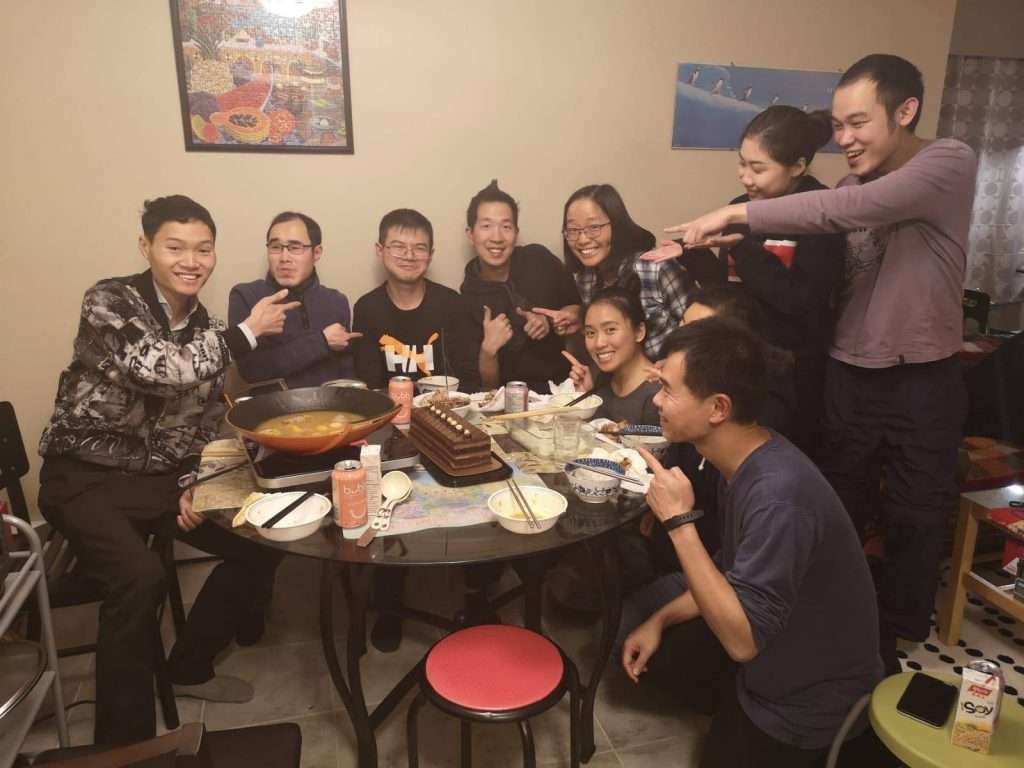 Through the years, not only I could control my anger, but God also turned my life around.  He gave me the courage to apply for the same government disability income assistance that I had refused before.  I also earned a Bachelor’s degree in business in 2010 after many prayers with my Christian friends to pass the courses.  He also answered my prayers about having a better relationship with my family.  My parents visit me every week after I moved out, and we now have a family chat group to keep in touch everyday.

My Christian friends’ continuous support and care help me to gradually overcome shamefulness about my disability and fear of failure.  Now, I can comfortably tell others about my disability and challenges because I’m useful and worthy to God and the world.  I’m also finally learning Braille transcription, a skill that I was recommended to learn for years.  I refused to learn this in the past because I was ashamed of being legally blind, but now I want to help those with less vision than me to access and read materials as sighted people do.

Being legally blind helps me to see God’s love and rely on Him more instead of overcoming challenges on my own.  It also helps me to realize that I’m worthy to be supported and cared for, as well as for me to care for others.  Now I want to live for God, others, and myself.